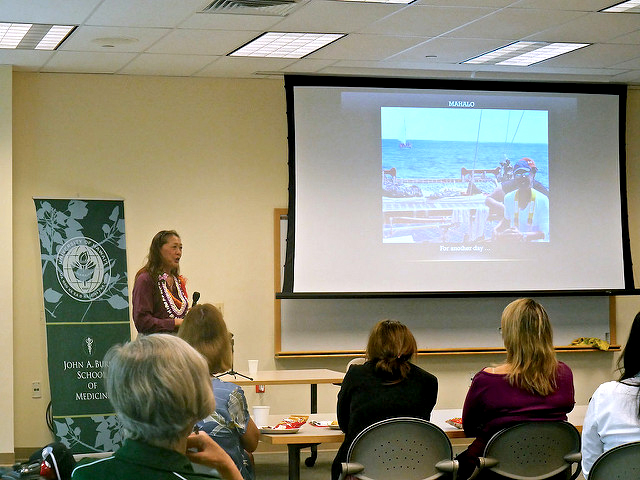 To celebrate the 25th anniversary of Women in Medicine Month, Dr. Marjorie Mau, professor and Endowed Chair of the JABSOM Department of Native Hawaiian Health, hosted a discussion on September 25 on the 3rd floor of the Medical Education Building.

Mau shared her experiences as a female doctor, and being the only Native Hawaiian in her graduating class at Creighton University. Out of 120 students in her class, 17.8 percent of the class was female. Now, she said, at least 50 percent of every medical class at the University of Hawaiʻi’s medical school are female; and six of every 68 students in each class are Native Hawaiian, which she considers “a lot of progress, in that regard.”

Breaking gender and ethnic standards has been an incredible experience, according ot Mau. She has spent decades working for the health and wellness of Hawai’i’s communities. She contributed to the founding of both the UH Mānoa Department of Native Hawaiian Health and the of the Lau Ola Clinic in the Gold Bond Building, and completed a voyage to the Polynesian Islands on the Hōkūle‘a.

Mau also offered advice to the group about overcoming obstacles and tackling opportunities. At the end of the discussion, Mau received a book from Dr. Winona Lee and Dr. Rosanne Hannigan.

Our video above includes highlights from Dr. Mau’s talk.